After experiencing discrimination at the height of the COVID-19 pandemic from their own relatives, neighbors, and community, Avinash has been engaging people in dialogue. His daughter, Sam, is fighting back through her documentary on migrant issues in the Philippines.

Avinash is an Indian entrepreneur married to a Filipina, Shierril. Together, they have three young children, and have been living in the Philippines since 2017. Their eldest son moved back to India to study Management. The daughter, Simran, more fondly called ‘Sam’ is pursuing Journalism and Mass Communication at the Lyceum of the Philippines Cavite. She is currently seeking an internship opportunity in media. The youngest son is still in high school, while Shierril takes care of the household affairs.

The Dream for a Better Future

After 22 years in Dubai, Avinash uprooted his entire family in 2017 to seek greener pastures in the Philippines:

“We migrated to the Philippines looking for better prospects, for better opportunities, for a brighter future because at that point in time, my thoughts told me that the Philippines is the next best thing happening. As you know, there are a lot of opportunities coming up here.”
The decision to move was also in part because his company, a global business process outsourcing (BPO) with 28 offices worldwide, was outsourced to the Philippines following the shutdown of several headquarters. Avinash was instructed to set up the local office at Mandaluyong in Metro Manila as the Operations Manager. Following the contract, he flew his entire family to live in the Philippines.

Challenges Amid the Pandemic

Unfortunately, the contract of Avinash failed to meet the expectations set in Dubai. The agreements were scrapped by his employer, and they were forced to come up with a new contract, which, again, did not account for the arrangements made before. Nonetheless, he stayed with the company for a few months. Eventually, he ended up starting his small business, coming from his more than 20 years of experience in the Hospitality and Restaurant Management Industry. However, things quickly took a turn when the COVID-19 pandemic struck, crippling several businesses in 2020. Consequently, Avinash’s company was adversely affected, incurring heavy financial losses amounting to PHP 4.7 million.
This was also a turning point in the lives of Avinash and his family because, up until now, their stay in the Philippines as Indian migrants had mostly been a positive experience. Following this adversity, Avinash and his family lost the support of their relatives and became the subject of racist slurs from neighbors and community members. Some of these nasty and derogatory comments also ended up being scratched unto their cars. Avinash said:
“I'm in a bad situation. I'm not in a country where I thought I’m safe. Since then, I am so disappointed. I'm just waiting for my daughter to finish her graduation from college and then I want to just go out of the country.”
Sam also expressed her disappointment with how things turned out for her family. She mentioned that one of the motives for moving to the Philippines was to be closer to their big extended family and to feel connected with them again. Since Sam already had wonderful and enjoyable experiences visiting the Philippines before, these new negative experiences with her relatives were very jarring:

“I always felt like I was at home. So, when we were moving here, I was like ‘Wow, it sounds great!’ And you know, the pandemic happened, and changes happened, and you know when change happens…. and I guess that's when you start seeing things for how they are.”
Avinash opened about how their relatives had come to expect lavish gifts from them in the last 20 years. But with huge financial losses coming from the pandemic, he had to prioritize his family’s needs over others which led to resentment and internal family tension:

“We had to really tighten our pockets. And obviously I have a family, I have three kids. I need to look after their education. I need to look up expenses. So, I had to take certain steps to control it, to budget it…. People started using certain terms that we are “Kuripot” (Filipino term for stingy) and that we don't do this for them, or we don't do that. But this Christmas, unfortunately, we couldn't do what we wanted to do…”
Against this backdrop, Avinash felt that his family and neighbors started abandoning them. For someone who had lived through the racism in the Dubai and Kuwait wars, the Philippines was the last place where he expected to face discrimination and exclusion:

“So since then a lot of people around us started disappearing and plus since it’s a pandemic, all of a sudden we found ourselves all alone again in the middle of nowhere and no one is bothered to even ask us whether we are dead or alive.”

Challenges Before the Pandemic

The first time Avinash and his entire family experienced an “othering” was during Immigration, when they applied for a long-term “Temporary Resident Visa” from Intramuros, Philippines. Since Avinash and his children had Indian passports, the Immigration Officers offered unsolicited advice: for the children to give up their Indian nationality, so they will not face any issues in the country, just in case. Finding this out of line, Avinash told the officers that the decision to retain or withdraw their nationality was up to his children when they come of age.

Sam also had an unsettling experience in school during a Filipino class that ironically talked about the proper and inclusive terminology for different nationalities. The term that the teacher used to describe Indians was “Bumbay,” an ethnic slur for Indians. As a freshman, Sam corrected her teacher and talked about how Indians do not associate themselves with the word due to its regionalistic implication and racist undertones. Instead, the proper Filipino term is “Indiano” because of how it doesn’t limit Indians to just one city in their country. The teacher was quick to change her content, which Sam deeply appreciated.

Outside class, Sam was also labelled as “5-6” (which references turban-wearing and motorbike-riding Indian loan sharks) by a security guard after she answered the affirmative to the question on her Indian identity. In her defense, a classmate told the security guard to refrain from using the racist term associated with Indians.

These instances show that there is clearly a lack of education on racial awareness and sensitivity, and the inclusive words for different migrant identities. They also show the openness of Filipinos to adjust their previously held beliefs when provided with new information.

After losing money in their Manila business during the COVID-19 pandemic, the family moved to General Trias in Cavite, where they now own a sari-sari store (small-scale sundry store). People who purchase from Avinash’s shop occasionally use “Bumbay” and “5-6” as the identifiers for the family and their store. However, both Avinash and Sam expressed their discomfort with the use of Filipino words like “Bumbay,” “5-6”, as well as “mabaho” which is the Filipino word for "smelly." All these are based on negative stereotypes about Indians in the Philippine mainstream media.

For Avinash, this is the equivalent of using the identifier “Filipino” to reference an Asian domestic helper or maid in countries like Saudi Arabia, Hong Kong, and Singapore. “Bumbay” is a localized version for the word Bombay, the former name of the Indian city, Mumbai. Therefore, using “Bumbay” as a personal identifier for all Indians is problematic as the word references a geographical point of origin, whereas not every Indian comes from the city. Moreover, using profession as an identifier for a person, such as “5-6,” is equally problematic as not every Indian is involved in microlending.

While he finds such language use unsettling, he surmises that the comfortability in using words like “Bumbay” and “5-6” so carelessly may be attributed to a lack of education on racial awareness and sensitivity and is not necessarily coming from an “othering” perspective as Filipinos do not really want to be racist, but unknowingly are. Therefore, Avinash and his family have taken it upon themselves to educate Filipinos against using words with racial undertones, especially the younger generation. But while some accept and are thankful for their explanations, there are others who mind “being educated” by Indians. Some of these people have gone ahead and have written the same words and other bad comments on the family’s car. When reported to the local barangay (neighborhood) and posted on the Facebook Page of their subdivision, no one from their homeowners’ association intervened to help. While these instances of exclusion may already be demotivating for a normal person, the advocacy to educate remains the same for Avinash and his family, despite the daily challenges faced.

On the other hand, Sam, as a Mass Communication student, is using her visual communication and multimedia skills to raise awareness on migrant issues and discrimination through film. She released a documentary titled “Odd Man Out” that she produced in partial completion of the requirements for a course in her college. 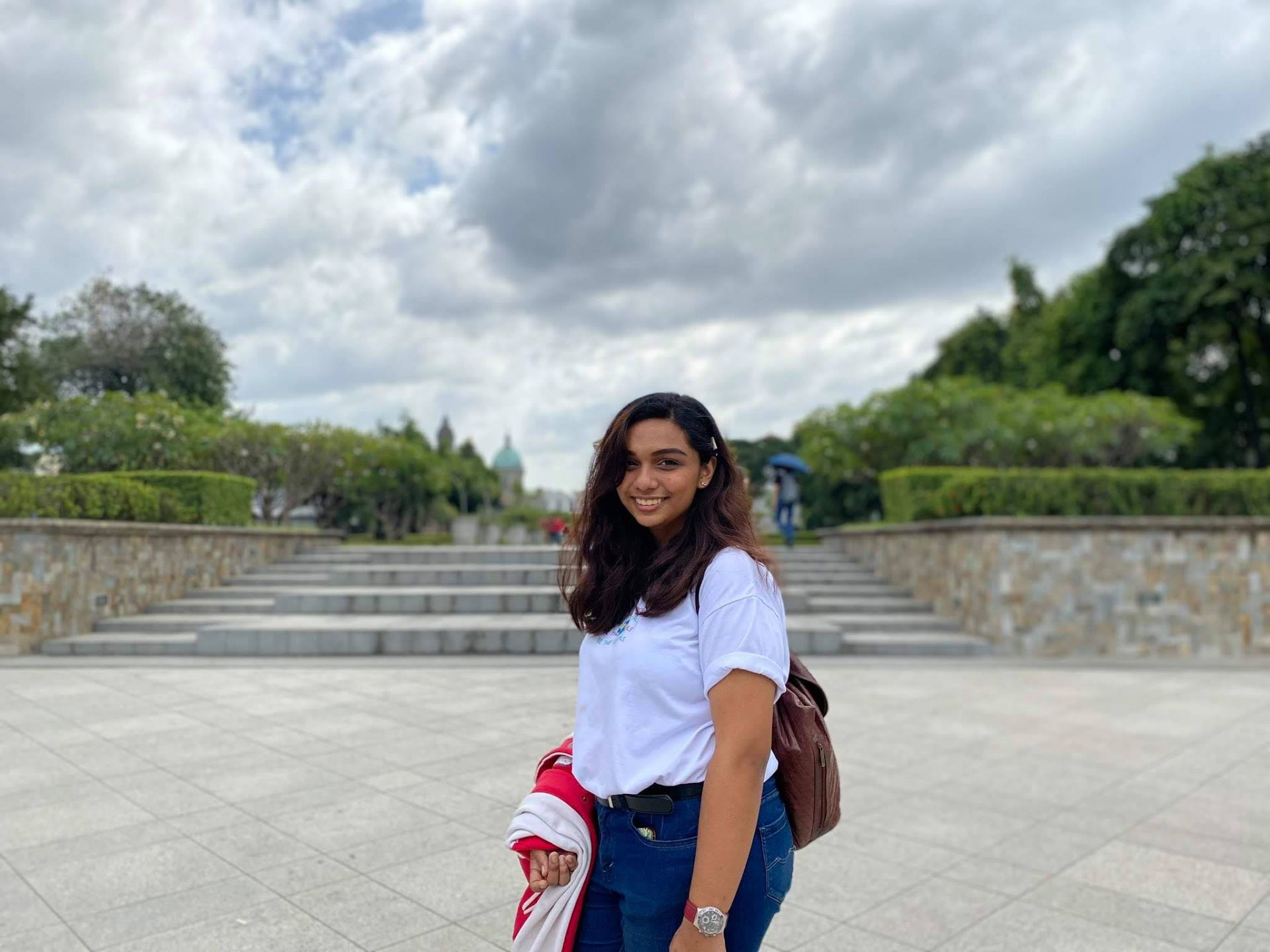 Simran “Sam” Madhar, a Mass Communication student with a documentary “Odd Man Out”

Even though Avinash still feels it best to move out of the country once Sam graduates, he is hopeful that by then, more will have been done in terms of educating and bringing awareness to the public on the discrimination and racism that still occurs for Indian migrants living in the Philippines. This will hopefully deter him from re-uprooting his family, who have already been on a daunting journey in pursuing greener pastures.

As for Sam, she hopes to intern in a media company where she can use her passion for broadcast, social media, and film to tackle more sensitive issues that are hardly talked about in Filipino society, including the intersections of migrant identities with race, ethnicity, gender, and religion.

Indians in the Philippines

According to the 2018 Ministry of External Affairs report, there are 105,000 Non-Resident Indians (NRIs) and 15,000 Persons of Indian Origin (POIs) currently living in the Philippines. An informant from the Immigration Officer revealed that on average 50,000 to 60,000 Indian students migrate to the Philippines every year. 90% of them are taking up Medicine degrees, while the others are taking up MBA or other business degrees. The average number of migrants has now lowered to 30,000 Indian students annually as there have been issues regarding the compatibility of medical education in the Philippines with the criteria of India’s National Medical Commission (NMC) Foreign Medical Graduate Licentiate Regulations of 2021.

Assistant Professor
Noel Sajid Murad is a certified digital marketer and full-time Assistant Professor at De La Salle University (DLSU). Currently, he is taking up PhD in Communication at the University of the Philippines Diliman. He earned his master’s degree in Marketing Communications from DLSU and his bachelor’s degree in Communication Arts from the University of Santo Tomas. Prior to joining the academe, he held several roles in advertising agencies, where he handled a roster of regional and local accounts. His research interests include popular culture, queer studies, fandom-based activism, communication and social justice, media representations, and the lived experiences of marginalized identities and communities.

We are a coalition of migration experts, academics and media professionals offering accessible and relevant courses to support people in the fields of media and communication to report factually about migration and bring genuine stories to light.
Drag to resize